Nowadays YouTube Music is considering as one of the largest music streaming services alongside Spotify, Apple Music and Pandora that grew up from a radio streaming service. How did YouTube handle the competition on the market throughout 5 years of its growth? And what type of marketing strategy was implemented by Google to promote this service the best possible way?

A long way up

YouTube music was founded in 2015 as a part of YouTube Red subscription. Subscribers could enjoy Ad-free videos as well as new correlated music streaming platform. App developer proclaimed that service to be a YouTube built just for music and revealed its best competitive advantage - the app lets you listen to your favorite songs but also remixes, covers, lyric videos and concert footage i.e. all YouTube content.

From 2015 to the spring of 2018 YouTube Music is holding a stable position in AppStore & Google Play in the US.
As of April 25, 2018, YouTube Music in on the 4th line in App Store Top Chart and on the 3rd line in Google Play. 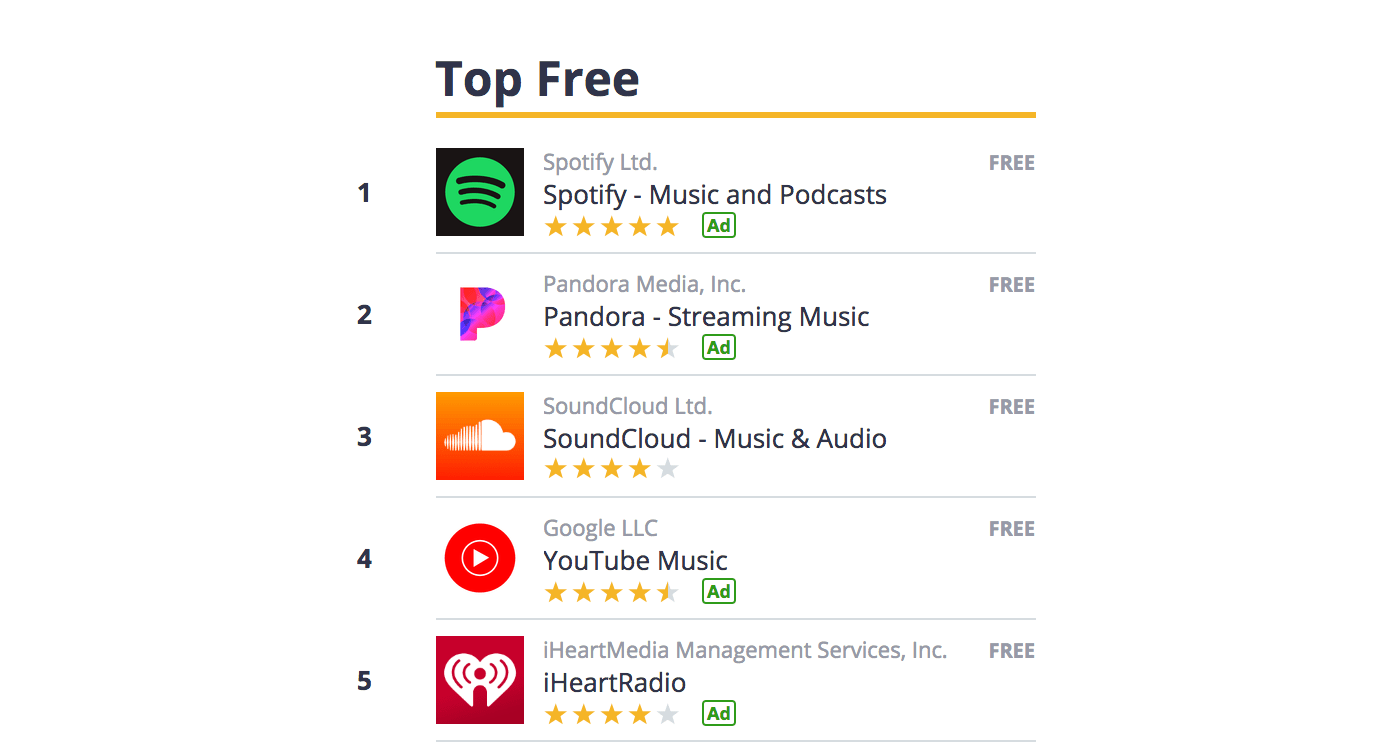 However, we cannot say that the application was just as popular in other countries. In Europe, Spotify remained a market leader. 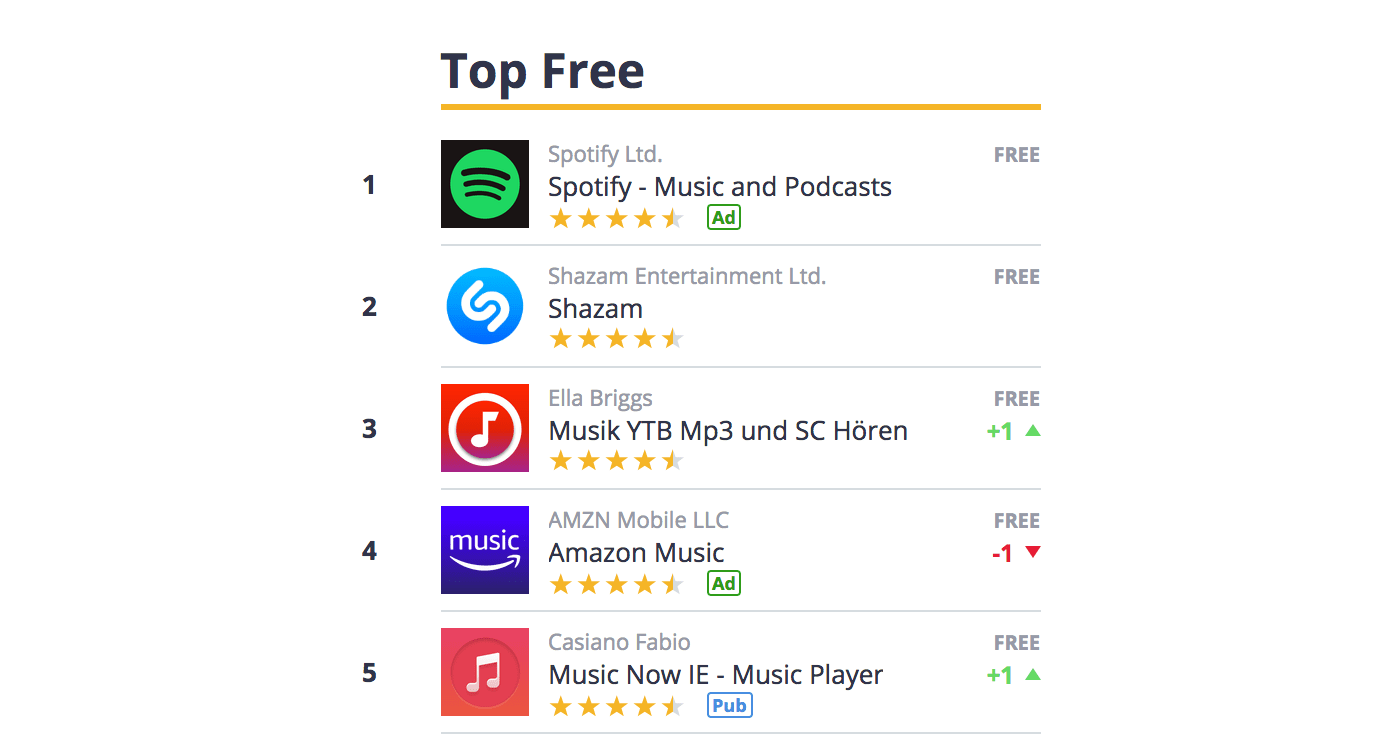 Spring 2018 was a turning point for the application. On May 18, 2018, YouTube revealed a new streaming service made for music. The interesting point here is that despite the fact that by the time the new version of the application was released the service existed for 3 years, YouTube asserted the tool as a completely new product. 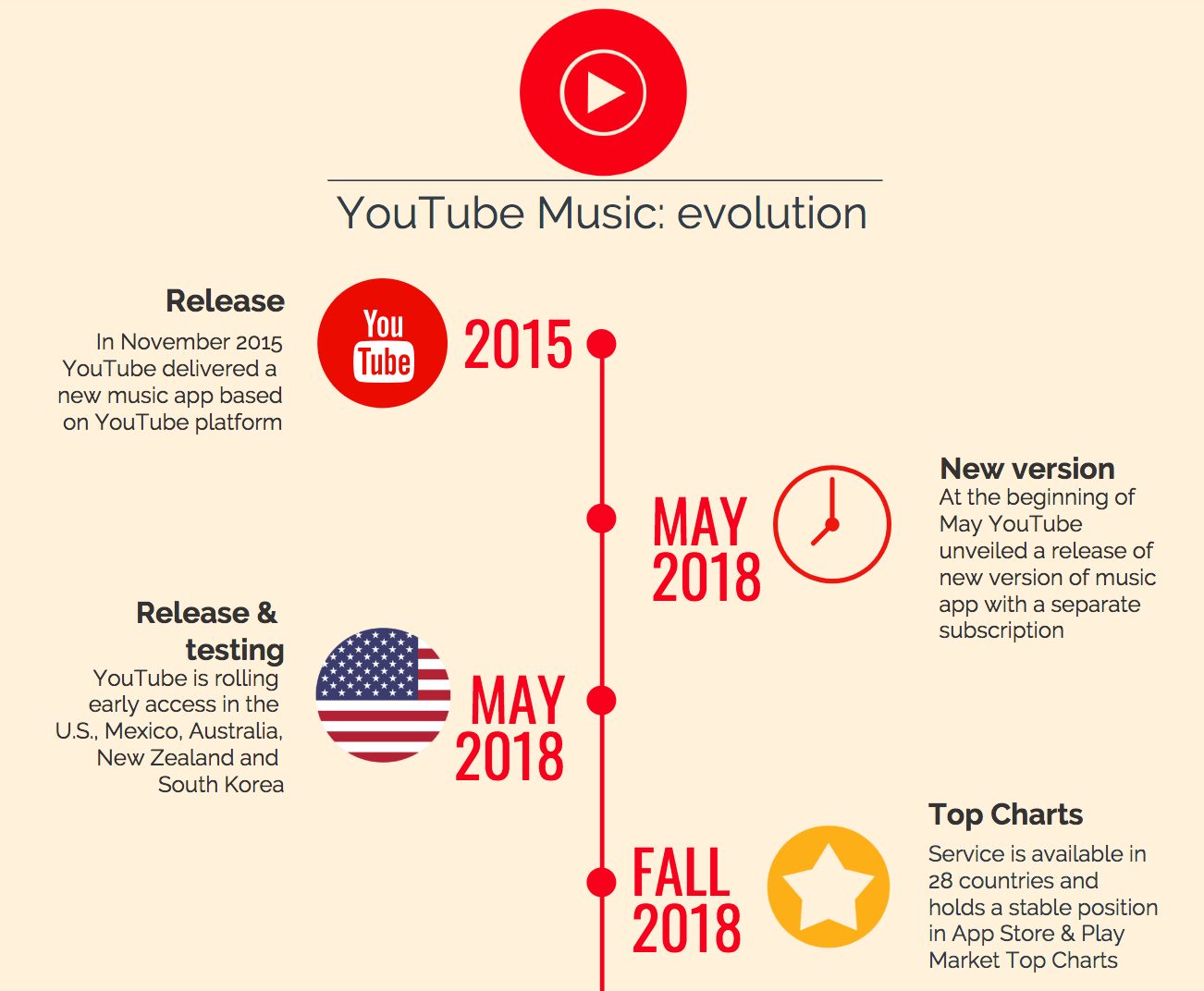 YouTube Music got to the charts all over the world pretty quickly. From May 2018 to February 2019 it’s making one of 10 Top Free and 10 Top Grossing in AppStore & Google Play.

Let’s check app’s dynamics in Top Charts of AppStore for the period from May 2018 to the present day.

Over 10 months YouTube Music application is ranging from 1st to 10th place in AppStore Top Chart in category «Music». Great results except from the middle of June 2018 - both Mexico and US noted a sudden decline. What’s the reason?
Although we don’t know for sure, we could connect it to the fact that June 18, 2019 YouTube Music released an application in 12 new countries and launched the Premium subscription.

First of all, of course, the huge part of YouTube Music Ad goes to its parent platform - YouTube. We’ve seen a set of appealing videos describing private life moments of 5 different people listening to their favorite music. A slogan is «It’s not just what we listen to. It’s who we are».

Then, after 1 year, YouTube Music released a new bunch of creatives including «Open the world…» and «Your sounds…» video series. And 4 videos made for Spanish-speaking audience. You can check it on YouTube Music official channel on YouTube.

Second, being a huge well-known service, YouTube Music is still advertising in applications besides YouTube. Apptica lets us take a closer look at the evolution of in-app advertising campaign of YouTube music.

YouTube Music starts with the most familiar and responding English speaking area - New Zealand, US and Australia. For the period from May 2018 to July 2018 these are the only 3 countries where we can see in-app ads.

In Autumn Advertising switches to Mexico, Brazil, UK and a little bit of Russia

The 8th of March we’re celebrating International Women’s Day! On Friday, people from all over the world will be saluting womanhood, equal rights and beating gender stereotypes what actually became a

“Casual” is one of the most popular game categories and year by year number of apps within it grow rapidly. Therefore in this report we would review most active advertisers within Casual Game