Creative Director for Playable Ads at Wooga, Tim Shepherd, told Apptica about his experience in creating interactive ad, shared some tips on how to boost conversion of playables, and confided the way to make the worst playable ad ever.

As you are Creative director for Playable Ads at Wooga and responsible for making an effective interactive ad, let’s start straight away: Why playable?

Most gaming playable ads are served within other games and apps, when the player is already engaged in an interactive experience. It makes sense that the type of creative to resonate will be one most contextually fitting to what a person is doing at a given time. Video is great for YouTube, as it fits that medium; playables are great within games for the same reason.

Beyond this - in all our ads, we are trying to communicate the intrinsic enjoyment of a playful experience. What better way to do this than within the creative itself!

In short, I believe it’s the best type of creative to suit the products we create, and ad placements they are served in.

What was the first time when you dealt with playable ads?

I had been aware of playable ads since around 2017, but hadn’t experienced many truly spectacular uses of the technology. A lot has changed since. Playable ads became my sole focus at Wooga since mid-2018.

How many playables you and your team created since then? Which one was your favorite?

Our archive is now approaching 100 unique creatives. Our most recent playables have to be my favorites, as we are learning how to cram more “wow moments” into the small file sizes, while constantly optimizing the messaging and experience. They just keep getting better and better quality.

Let’s get into details: how much does it take to create one playable? How many people are engaged in one project?

As with all software development, a lot of the work is solving the unforeseen issues which arise as you go. As we solve more of these issues, it gets faster to create each new concept.

Currently, a typical new playable will require a brainstorming session with myself, UA, and the games’ team to figure out a concept we want to develop.

This can then take one or two developers ~2-3 weeks to build. The most important thing is the balance between how gameplay and fun is accurately represented, balanced with a powerful marketing message which resonates with the target audience.

How do you check the conversion rate of your playables? How do you optimize interactive ads in order to increase retention?

With playables, as both a new and interactive creative format, I have seen publishers attempting to artificially boost conversions with misleading UI (fake close buttons etc), which send players to an app store when they didn’t mean to. This builds an environment of mistrust in players around playable ads, and has just terrible metrics further down the funnel. I do NOT recommend it!

We have robust in-house reporting for all our creatives. We look at a variety of metrics to evaluate our playable performance. For example, it is not unusual that we see higher CPIs on playables compared to video, yet the ROAS makes the extra investment worthwhile overall. It’s important to be checking the stats through the entire funnel, not just conversion.

I will always try to end a playable experience on a ‘wow moment’ which piques players curiosity about the content of the game - a huge reveal, a big reward moment, a story cliffhanger… All of these methods are great at making players excited to uncover the secrets in the games themselves. I believe the immersive playable experience delivering those moments can help boost retention later on in the actual game. 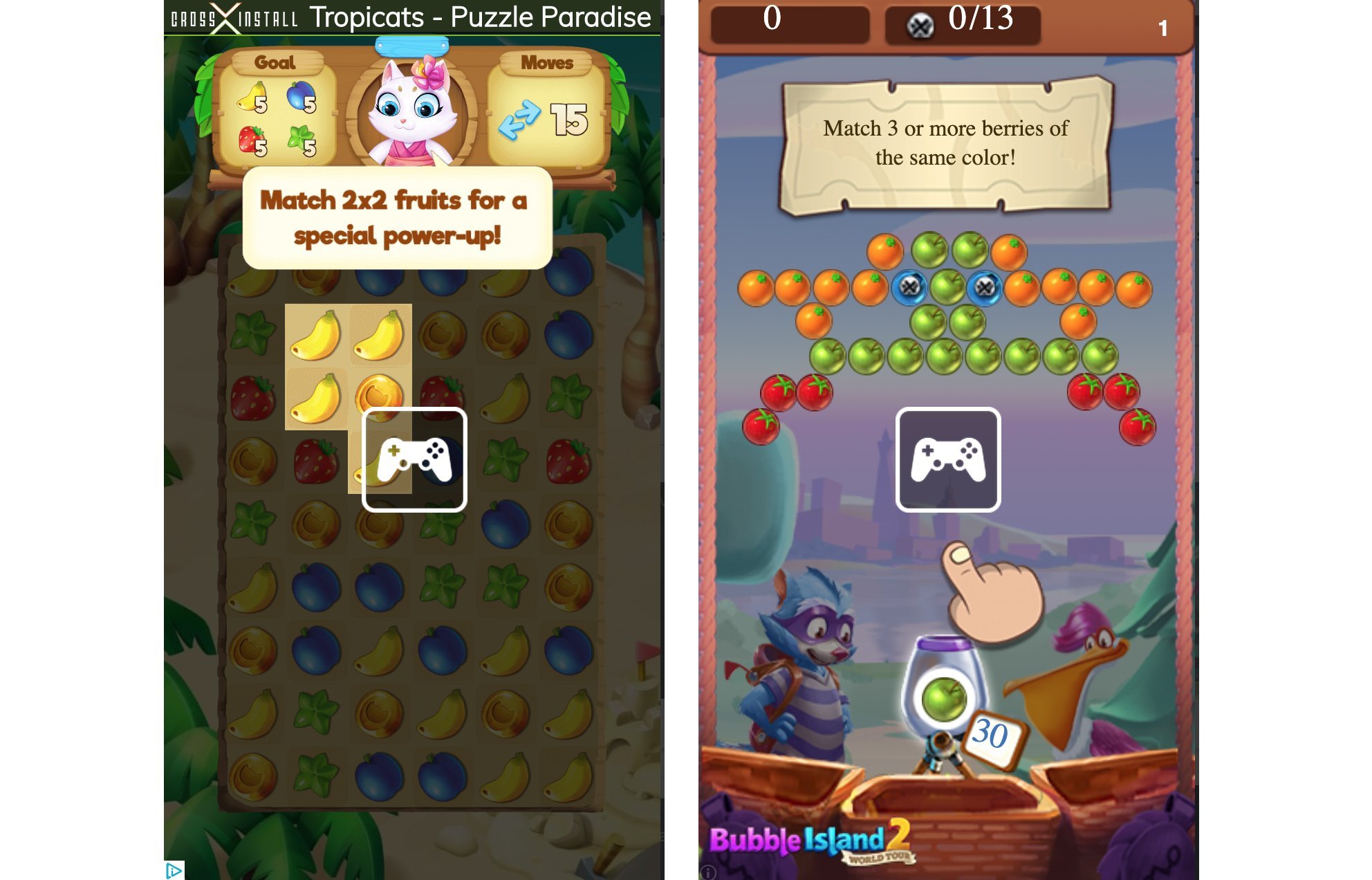 What other specific tools/software can you recommend to someone who’s eager to make playables?

There are generally two approaches available: interactive video (video wrapped in a layer of html), or pure html (rebuilding the game from scratch in web languages).

I recommend you do research early on to identify the route which is right for your game; some games simply can’t be built efficiently in html within the restrictions of some playable ads, which must be relatively small in file size. So for large, 3D, cinematic games who want to show of an ‘on rails’ experience, video is probably best. The downside is that video is typically still too large for some networks.

Building from scratch gives you full control over all interactions and fine-tuning the experience, but requires a lot more foundational work to get up and running. I find this approach works best for our titles. It really depends on your game and which parts you want to showcase.

There are some great html tools and engines available for either approach, such as Phaser, Defold, and even Unity’s “Unity for Small Things” platform for building from the ground up. More ‘out of the box solutions’ would be TreSensa for html (a powerful GUI-based solution which doesn’t require coding skills), or Synative for video. We have also successfully worked with outsourcing services such as Cross Install’s Creative-as-a-Service (“CaaS”).

For which app categories playable ad doesn’t work/ works the best way and why?

Good question! We have had success with our casual, story driven titles which are very easy to understand and have accessible gameplay mechanics. But other, more complex games may not translate to a ‘lite’ playable ad experiences quite so well.

That said, I think as long as you are open to a little creative problem solving and can think of ways to refine the experience to key interactions and moments in your game, playable ads can work for everyone.

A general design rule of mine is “communicate the concept, not the details” - don’t be afraid to simplify a lot to get your core message across; the players will discover the nuance and wondrousness when they install and enjoy the game, which is your ultimate goal.

Share with us the best ROI increasing case in your practice

One of our biggest wins was appreciating the difference in opening a playable ad compared to opening a game. When players open a new game - whatever it is - they have some understanding of what type of game it is they downloaded (from their searches / recommendations / app store screenshots etc) - they know (roughly) how to play.

You can’t always take this for granted in playable ads: the prompts given in a game’s tutorial might need to be even more clear in a playable ad. Make the effort to communicate that a) this is indeed an ad a player can touch and play with, and b) what it is exactly they are trying to achieve, and how to do that.

If you can’t get that first interaction rate to be ~100%, you need to take a hard look at your opening impression UI/UX - there’s a good chance players don’t understand what they can touch or should do.

If there are any disadvantages of interactive ads :)?

Production and iteration time/cost is a challenge. Worse still, if you don’t get it right the first time, you might be tempted to simply say ‘playables don’t work for us’, rather than to double-down and learn from failures. It takes time to find an approach which works for you. With few best practices established, the iteration required can also be resource intensive.

Could playables completely force out video ad and banners in the future?

I think there’s a time and a place for everything. I definitely see playables taking up a sizeable market share over time, but there will also be placements where banners (such as in apps / hypercausal) or video (such as YouTube pre-roll) still perform best.

Is it true that the color of the button can influence the conversion?

So I’m told… though I would focus my energy on iterating on more tangible changes, such as more prominent UI/UX, or refining my CTA messaging.

Tell me 3 ways to make the worst playable ad ever

What technical skills are needed to become a playable ad expert?

I have a background in product management and games design, as well as broad marketing experience. While I will leave the heavy lifting to experienced engineers, I have had to level up my technical expertise a lot to help resolve issues and make decisions.
If you’re not techy at all, I would recommend a familiarity with js and html - try some Phaser tutorials to get started. Also, understanding what the technical aspects of network requirements actually mean will help you too - MRAID support, inlined assets, compression options, responsive design, localization support, file size limits, tracking APIs… it’s all going to come up.

Apptica welcome you to the FREE WEBINAR dedicated to user acquisition managers, also app developers, marketing specialists as well as ad networks and ad agencies executives. And simply for those of you who

Top mobile publishers are facing the Middle East more than ever, according to Mobile Ad Analytics platform Apptica. One of the trends of 2019 in mobile advertising is a focus that is shifting

Blog - Apptica
—
How to stop worrying and start making interactive ad? An interview with playable ad expert
Share this